The Story Behind... Blue Hour at Cowes Jetty

Phillip Island is situated east of Port Phillip Bay, and is famous worldwide for hosting the Moto GP in February. But as I discovered this week, it is a beautiful spot, only 1.5 hour or so from Melbourne, and full of stunning landscapes and outdoor activities.

On Wednesday morning, I got up early to have a go at the sunrise. Staying in Cowes, on the North side of the island (and being the main town thereof), I decided to go close, to the jetty. I took a few shots, from the beach on the western side of the jetty, then moved to this side (east) as I thought the long jetty would block most of the sun as it rises behind it. I therefore settled at the start of the jetty, and waited for the sun to point its nose over the horizon. This one was taken in the blue hour before the actual sunrise.

I had my tripod, and screwed on a polarising filter in front of the lens, and set it for a long exposure - 3 seconds - at ISO 100, to get maximum details, and get that smooth effect over the water. The light on the bottom left-hand side of the shot, on the stones, comes from the street lamp over, and helped me bring the textures of those beautiful bluestones.

Quite a few people were also walking on the jetty, so you can see some silhouettes there. That's the perfect time for fishing, not just taking photos!

Unfortunately, the sky was quite cloudy above the horizon, so I didn't get (looking towards the east - or to the right of the photo) a good sunrise. When the sun pierced through the clouds, it was already high above the horizon, and to bright to take directly.

Hope you enjoy it. When I have a bit more time, I'll post more photos of the Phillip Island trip, as well as my (not happy) story re my jammed lens...

Thanks again for your visit!
Posted by Unknown at 23:20 No comments:


This continues my series of macro shots taken in the garden. This one is from a bush of old-style white roses - as the roses were already planted when we arrived in the house, I'm not sure what exact species these ones are. I guess they are a type of Hybrid Rugosa, but can't be certain - please send me a note if you know.

As usual, I shot this one handheld, and under natural light, in the late afternoon sun.

I really enjoy shooting those macro pictures, where the subject is a detail of a flower (or another object, for that matter) - here, the stigmas (centre) and stamens are the stars, providing a sharp contrast of orange / yellow colours against the softer white background of the petals.

I tried a few different angles, and ended up with this one, looking from the side into the flower, (with the couple of petals in the foreground completely blurred out by a f/5.6 aperture. This also lets the sunlight hit directly the centre, and illuminate it.

I did a bit of editing in Aperture (which is the Apple software I use for both cataloguing my photos and doing most of the post-processing, where required) - I first cropped the shot a bit, to remove some of the green background (still a bit can be seen on the right-hand side), and then adjusted a few parameters; mainly increasing the definition and saturation, to enhance once again the centre of the shot, and magnify the details.

Thanks for reading!
Posted by Unknown at 21:56 No comments:

The Story Behind... Portrait of a Mantis

This shot is from an impromptu meeting. A couple of nights ago, my wife had a little scare as she met this little mantis on our deck. But the surprise over, she called me as she realised I'd be keen to take a few snapshots of this beautiful little bug.

I straight away took the camera, but it was quite dark outside. But I thought this was the only chance I had, so set the mantis in a pot of flowers nearby, and started to shoot with the flash. I then moved it to a cyprus bush, and tool a few more shots. When I reviewed the shots later on, I was not fully happy with them, as it was hard to get a good focus in total darkness, and the flash and focus of the Tamron lens combined were way too slow to get an interesting shot.

So I was nicely surprised, the day after, when I went in the garden, and this mantis was still there, baking in the late summer sun. You already know what I did next! I rushed back inside to grab my camera, determined to have a good shot under the nice morning light.

And I did! I tried a few different angles and distances, as well as a few different sets, thanks to a very helpful Mantis, happy to be moved around, carried on a stick, and probed to show its best angle!

This was was shot in a bush of purple Platycodon Astra (Platycodon grandiflorus), hence the nice purple hues in the background. I aimed at focusing on the eye, whilst setting a shallow aperture of f/5.6 to get nice separation between the face and the rest of the body. I also turned down the ISO to 125 (I usually have 200 as a standard setting on the camera).

I'm not quite sure what the exact species of Mantis this one is. It's a brown / beige colour, not the green mantises I'm more used to. Please let me know if you know the species name, as I'd be keen to find out.

Hope you like it! And thanks for your visit

The Story Behind... Coeur de Rose

Another image in my macro portfolio, as usual taken handheld under natural light. This one was taken in the afternoon light, still a very nice warm weather down under (32 degrees).

The flower is obviously a rose, one of those old-styled one, burgundy in colour. Quite unusual, and just beautiful. I tried a few different shots, with different angles and focus areas, but this one worked best. You really want the first row of pistils to be in focus, whereas the back ones and the petals being more blurred (thanks to a shallow 5.6 aperture) direct the eye to the heart of the flower.

Unfortunately, we arrive to the end of summer down here in Australia, so this is going to be the end of the flower series. I'll have to find other subjects to shoot during the colder months!

The Story Behind... Bébé Fraise


I took this photo today, in the garden. We have a little pot with a strawberry plant, and I've tried a few times to get a nice shot of the little flowers. First, I tried with my macro lens, but couldn't quite get the centre sharp enough - a bit hard too with the wind slightly blowing!

I decided today to try the Nikkor 70-200mm instead, with a screwed on Hoya close-up filter (+4), and I am happier with the result. The centre could have a bit more sharpness, but for a hand-held shot, with a slight breeze, I quite like the end result.

Re aperture, I set it at f/7.1, which gives me enough focus for the overall flower, yet blurs the background nicely.

I shot this image in RAW format (as I mostly do for my macro shots), then processed in Aperture - added a bit of contrast and saturation, to enhance the definition in the yellow pistils.

You can already see in the centre what will become the 'seeds' on the mature fruit. Those are called achene, and are actually the ovaries of the flower, with a seed inside it!

As for the title, Bébé Fraise, I'm sure you've guessed by now it means Strawberry Baby

Thanks for visiting!
Posted by Unknown at 19:58 No comments:

Nikon lens - Buy or Repair? What to do?

I'm devastated! My trusty friend of many years, aka my Nikkor AF-S 28-70mm f/2.8 D (see below photo), stopped working a few weeks ago... Impossible to turn the zoom ring anymore, something is blocking it (and I don't want to force it for fear I'll make it worst - it usually turns so smoothly). 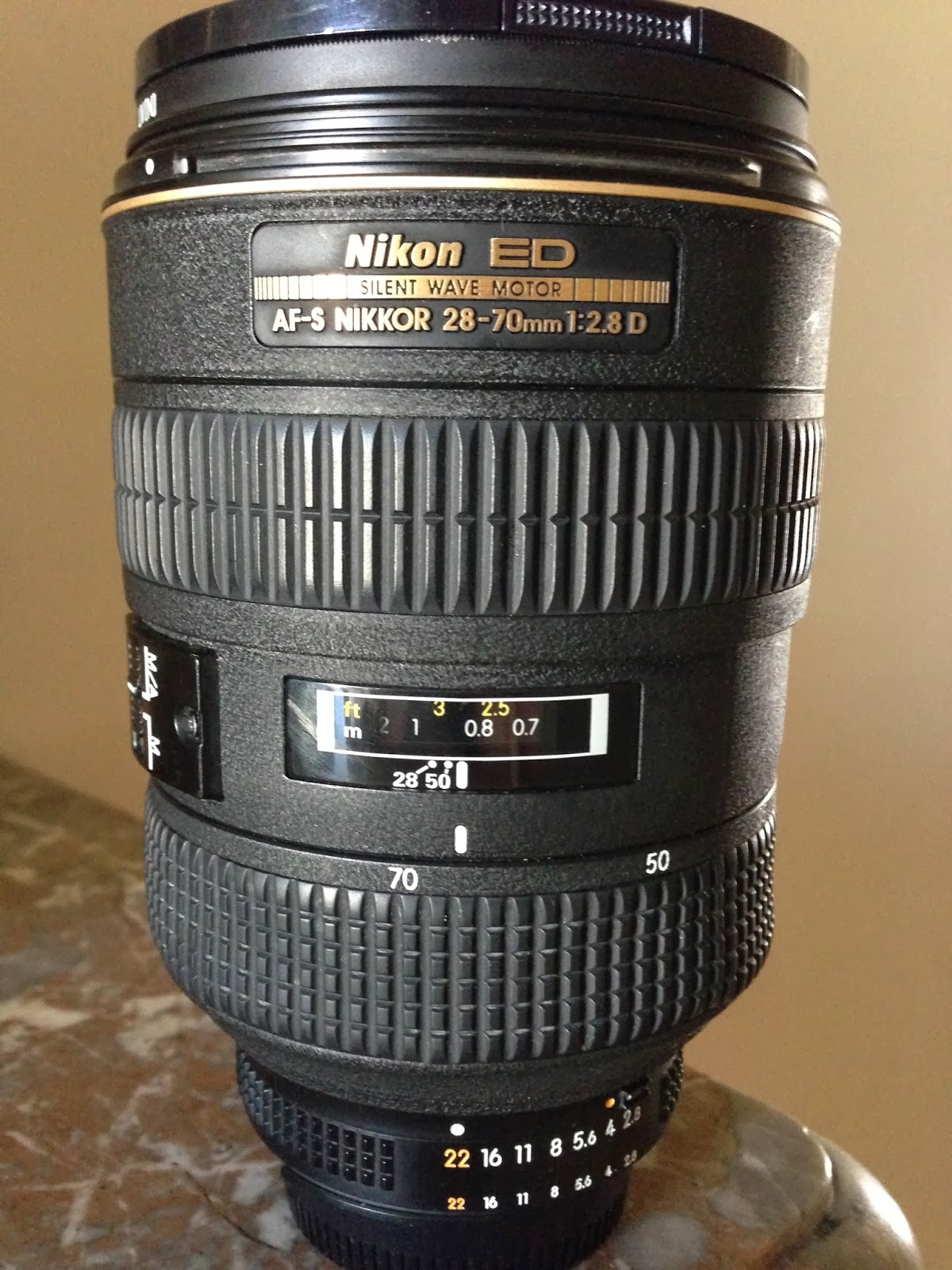 So I sent it for examination at one of the Nikon certified service and repair centre, here in Melbourne. It just came back to me with the diagnostic -  they've unblocked it, but to properly repair they ask me for over 1,000 Australian dollars! Nearly fell off my chair!

I know it's a beautiful lens, and a professional one at that, but I can't spend that much on repairing a lens, especially when I can find a (used) one for that same amount of money. I can't believe fixing something nowadays is more expensive than buying new - I know that I sound very old school (well, I'm over 40 now :-) but I still can't get used to the idea. Sure, had I paid $200 for a lens, I would expect for it not to last that long, but this one is a professional grade lens, made in Japan, out of metal (inside and out), not a plastic cheapie.


So - what should I do? Any tips? Is there something I can do myself by buying a spare part on the internet? I really want to keep using this lens, but my budget cannot afford the Nikon service cost.

I'm keen to get your point of view on this.

The Story Behind... Bouton d'Or

The Story Behind... Bouton d'Or